In Yardley's "Heart of Huna", she mentions an interesting point that Daddy Bray thought the 3 Selves of Huna were metaphoric.

Those three selves have been described differently, but in King's "Mastering Your Hidden Self", he says they (very) roughly approximate to the sub-conscious, conscious, and super-conscious.

There's another interesting datum that the conscious mind is really only about 5% active. Most of the "brain" is just unused space. (Nap Hill readers will see why that is in quotes.)

Add this to the concept that the subconscious does all the work of running the autonomic system as well as digestion etc - most of which we would never do consciously, even if we could figure out how to.

But there is the training required so you can move through the barrier of the body into the spiritual version of Self.

Of course, this all comes back to the idea that there is just Self out there and we are all connected ("there are no limits.")

You simply have to let go of your own programming enough to push through your identification with a singular body and begin to experience the infinite Self, to start living in potential - instead of arbitrary limits.

Here's the schematic of that: 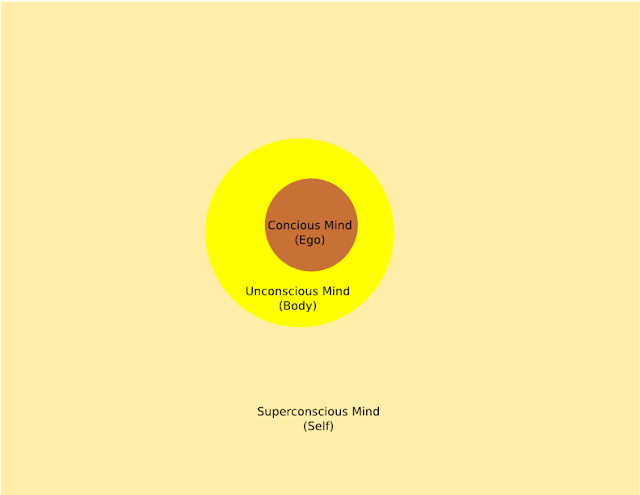 The trick is that while there are limits to the ego and the body, Self is unlimited.  Just goes on forever. Which is why all this telepathy and akashic records stuff works. And why certain belief-systems put great store on "astral walking". But really, being "out there" is far more "normal" than being "inside".

You just retard your own abilities to fit into a little tiny Cinderella glass slipper so you can go to the ball.

Practically, you're actually the ball, all the horses, carriages, pumpkins, fairy godmothers, and everything else all at once. But to play a game, you figure that you have to have a foot small enough to fit into a slipper so that gorgeous guy will marry you and take you to live in his castle.

What you are pretending to not know is how you built that castle and supervised it's construction and collected the taxes to pay for it while keeping the borders secure so that commerce could take place, etc. etc. etc.

All of this is just another excuse for you to look outside whatever existence you have and decide to make some sort of meaningful and positive change in your life - one which will help all concerned.

Plus it gives me another chance to talk with you.

Email ThisBlogThis!Share to TwitterShare to FacebookShare to Pinterest
Labels: huna