Review of Lester and Me by Stephen Seretan 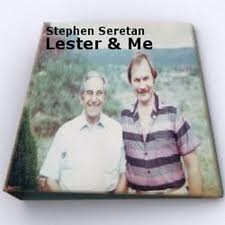 “Lester and Me” by Stephen Seretan
84 pgs. Available from http://lesterandme.com

When I read this, I was amazed at how much truth could be told so simply. Very, very few of us ever get to meet a real Master in the flesh – and Seretan has done so.

You only have to look up those people who are still around who did talk with Lester Levenson in his Sedona days to verify that this was one incredible being. As well, copies of Levenson’s recorded lectures are available, as well as some rare videos.

What Seretan offers as well is the personal glimpse into how Levenson affected his life – and what he went through on his own road to greater understanding of himself and why his own world was working as it did.

Now much of this book could be straight out of a sci-fi novel – and in fact, it has all the makings of a good movie. The characters, the pathos, as well as the ultimate triumph possible where Seretan actually did understand Levenson and took it to heart.

For instance, when he couldn’t get into an advanced class, Seretan applied the techniques he learned and got into the Inn where it was being delivered, then called Levenson – who arrived in his room and gave him more personal attention then he would have gotten in that seminar. However, Lester himself had to point out how much of a remarkable event Seretan just created for himself – and yet chided him that instead of getting that room at a sizeable discount (as he had) he could have gotten the room for free.

There are other tales of supernatural events, and out-of-body experiences, even UFO encounters. But there isn’t space here to tell these tales.

My own understanding of Lester’s work is simple, but indirect. And too many times, a person of this magnitude is simply lionized and sanitized for public consumption by those who would profit off their memories.

Seretan, in his own style, just tells about his friend and mentor as he met him and as he knew him. To him, Lester would pull no punches. One time, he told Stephen in front of a whole class that he would make better progress if he taped his mouth shut. But the meaning – even if it seemed to hurt – was obvious to Seretan, and assisted him to understand himself on a deeper level.

And for those who may be familiar with Hale Dwoskin or Larry Crane’s or others’ re-telling of Levenson’s story, it is really requisite that you get this book to get the honest, inside story of the very real Lester Levenson.

You might even see a new side of yourself.