Relation of 4 "Ways" to You

After my last brain-crunch, something else became obvious.

Just as self-help materials help a person master the objective level and move out from being mostly effect of the body and universe, so would other studies then help you empower yourself through other levels.

These levels seem to be nested (although that's just a convenient metaphor): 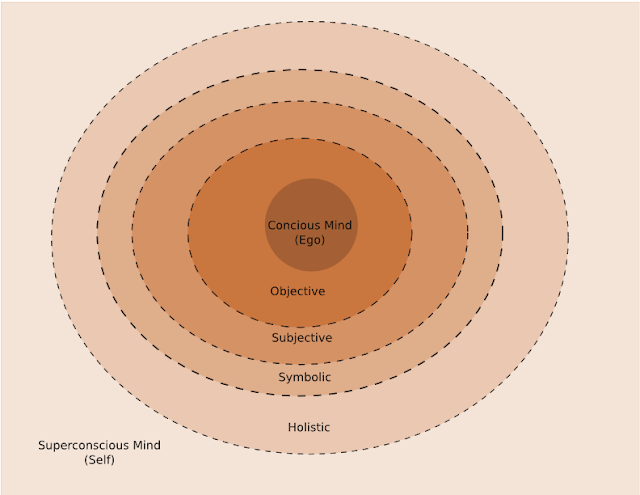 Huna is perhaps the first to describe these levels as separate (most others only describe the conscious-unconscious-superconscious arrangement). Even then, you have to pass into shaman training in order to get the above explanation. Thanks to King, Bray, and others, we are able to have this data again. Western culture had essentially lost its way.

Most of this has been an all-or-nothing approach to this point. One would either go all the way, or would  stay minorly operating in the Objective plane. That left most of humankind simply slaves and slavers. (Our current condition for the bulk of humanity.) This is applied to governments, such as the "Arab Spring" currently underway. People are getting better communication tools and so being able to organize and demand their basic human rights.

Humankind's highest states were known vaguely as "enlightenment" or "bodhi". But even then, enlightened buddha's had differing ability levels. Even still maintaining a body would to some degree keep you in this objective plane we apparently share.

The materials Locke and others wrote which formed the foundation of the U.S. republic is very enabling in dealing with the objective plane.  Other materials for this level include the bulk of self-help texts.

Some take you further than others. Silva takes you into the symbolic level with their "Mental Laboratory". But you'll also find this in Hill's "Think and Grow Rich" chapter 14, with his "invisible counselors" technique.

Levenson's releasing technique can take you into very stable, sublime conditions - but won't give you the tools to fully understand and develop what you find. And this is where spiritual training comes in. Levenson's own studies were mostly to bring him back to being able to communicate with those around him, in order to help them achieve that high state he found. He died a very normal death.

Some studies, such as Jung's archetypes, tend to educate mostly in the symbolic plane, but are widely misunderstood. And that is apparent as people try to "make sense" of them on the objective plane and fail.

Very, very few deal with the holistic level, which bridges the gap between the body as a symbol for the universe, and not needing a body or separate individuality to prove your existence - which is at that level and beyond. Apparently, a handful of people are able to "see" entities who operate on this plane. And our legends are filled with this type of material.

Again, just take this as a metaphor. But it may give you a way to study this area as you work to regain your native abilities. Don't use this material to "make sense" of anything. Use it to explore for yourself.

It's apparent that you can pull from any of these planes to solve whatever is affecting you adversely - aka: healing. And that's where the metaphor falls apart. But if it weren't for being able to access the "higher self" via intuition and inspiration, then all these "breakthroughs" wouldn't have been possible.

Through these planes, there are no enemies or actual conflicts. There is just adventure. (I'd hazard that the "warrior" concept and philosophy ends at least on achieving the symbolic plane, if not before. And pushing people to drop any idea of "competitive" in favor of simply being creative is known through most of the basic self-help materials (Haanel, Wattles, etc.)

Again, these are just notes for your own studies, as I continue mine.
Posted by robertworstell