BFF – because we can

The most remarkable and powerful statement is in that 1st Huna Principle - “The world is what you think it is.”

If you are looking for enlightenment, just take that one statement and run with it. Of course, you’ll find that enlightenment is already there.

The secret is in that sentence itself.

The other 6 principles only work to explain the 1st one. As does the rest of the study of Huna itself.

My own analysis of this takes it quite down to a simpler form (several, actually.)

Consider that the 2nd principle (“There are no limits.”) means that we are all connected. This could really roll right into the non-dualist concept that we are, for all practical purposes, just One. But of course, that won’t mean that your personality disappears overnight or in the next second. But it does mean that the Golden Rule might work all the time (as it does) because you are really only reaching out to help your self when you help somebody “else”. (And also explains why politicians never keep their election promises – they are now responsible for a lot more people and so are being changed in ways they as “individuals” never suspected could happen.)

So drop out the “you’s” in that sentence.

Next you’ll see two “is’s”. This is the various forms of be (am, is, was, were, are, will be, etc.) English is fairly unique in that regard as we’ve taken all these different words from different languages to express the same concept. Be.

Take out the articles and helper words (the, what – which don’t really mean anything except to help glue the sentence together) and you now wind up with something like “world think be”

Look over those concepts for a bit.

World is obviously the universe itself – everything that you perceive around you.

Think just drums up the Quantum Physicists’ concept of what you think, you create. And when you take this idea of creating back through Charles Haanel’s “Master Key System” to Troward and on back – you’ll find that to Create is to Love.  And to Love is to Be.

So an early shorthand of this gives a simple formula:

As a formula, you can just put an equal sign there, or one of those math symbols which has an arrow pointing in both directions, implying equal action-reaction on both sides. The colon is something that probably says it best (without having to jump through typographical hoops to print a simple sentence.)

However, this really can become even simpler. Bottom line is Archimedes place to stand (in order to move the world).

These two words also simply have Be in common.

And to couch it in a simple term, a meme we can all support to help each other as we help ourselves: 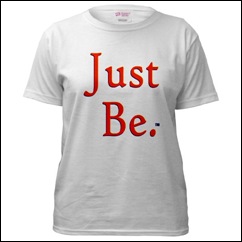 Email ThisBlogThis!Share to TwitterShare to FacebookShare to Pinterest
Labels: creation