Living in the Akashic Stream 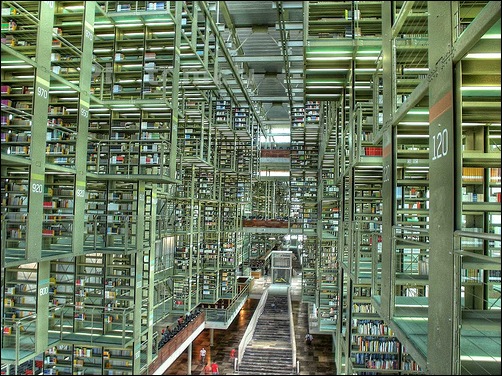 When you look up “akashic records”, to my mind what appears is some immense static library of books. Or like the old Alexandria library, a collection of scrolls of all written knowledge in existence.

But practically, we are surrounded by such all the time. Just not necessarily in a tangible version. Simply, the world as you know it (or as you ignore it) is composed of all thought of everyone. So one has access to all knowledge at any time.

Of course, you see bad examples of this played out in insane asylums all the time – people either quiet and withdrawn and in their own universe, or people screaming and ranting in non-sequitur performances.

We are all – whether immersed or in denial – living in this Akashic stream of data. Perhaps the Internet has brought this more to the forefront.

As I often point to the Quantum Physicists, who have made the complete loop of materialist-only science right back to the ethereal understandings of faith and belief, – these fellows now hold that what you think is what you get. (WYTIWYG).

And thinking itself as a word (along with “faith” and “belief” have taken some trips down wordsmith lane, similar to affirmations and Emile Coue’) doesn’t mean anything other than what you consider that it does.

So lets use “consideration” as a neutral term.

Being surrounded by all knowledge, all understandings, all postulations – that can be a bit overwhelming. But practically, your tools to handle this are already at hand.

That old “Law of Attraction” which got over-hyped a few years ago – this is the exact point. If you pick up Atkinson and study his works, you’ll see that you get to this point of concentration being the key point. Atkinson even wrote a book entirely on this point.

What you concentrate on will start bringing in closely associated data (like attracts like). This is held up as example by Napoleon Hill in his “Think and Grow Rich”. He talks about a Dr. Gates who simply sat in a darkened room and concentrated on the data to hand until he started getting answers – and then wrote them down furiously until spent. Turned out Dr. Gates was the author of numerous patents based on his discoveries.

But you’ll also see that anyone can do this. This is why the light bulb, telephone, and other inventions have been separately “discovered” at exactly he same time on separate continents. Edison had his own techniques for accessing this “stream of consciousness” by taking as many as 14 naps  or more every day. He napped for inspiration, not to remedy tiredness (although he also only needed 3- 4 hours sleep every night.)

You can get any solution you want simply by concentrating on what you want. And so this explains success in any form. Trace down people who have written about this (Claude Bristol, Dorothea Brande, W. Clement Stone) and you’ll see how they did it. Sports figures also do this. As well any successful song-writer.

And track down successes in film, TV, and entertainment – you’ll find that after they made their string of hits, they often would then concentrate their activities into a singular line and become success at that as well. (Fess Parker of “Daniel Boone” and “Davy Crockett” fame went into producing wine. Gene Autry owned several successful businesses in the recording and entertainment industry, including a baseball team. It goes on.)

Those who were “one-shot wonders” and died broke never mastered their own ability to concentrate.

So try this out for yourself. In your daily prayers, or meditations, or “seeking the Silence” – just calm yourself by relaxing and let the thoughts flow by. Hold onto only those which you would like more of in your life.